February 2016 - Six Saddle Back pigs arrived to Richys home farm in Carrigfadda. A medium to large lop eared pig, mainly black but with an unbroken white band running over the shoulders and down to both front feet. It may also have a white tip to its tail, white hind feet, and white on the snout, but this is not necessary. A docile pig, with good mothering skills. It is also very hardy and a good forager.A good dual-purpose pig for combined pork and bacon production.

Richy wrote - Every chefs dream is to raise animals and see the final product and the process between it. So when we set out to do this it was too highlight the rare breed pork in Ireland is as good as the best fillet steaks. There is a missconception that pork has to be cheap. this experiment was to raise our own awareness and educate ourselves, our team and our guests. The whole process has been a over whelming learning curve and we had got very attached to our six little girls. Now seeing the end product would I do anything different? I probably would have brought them to market 6 weeks earlier due to the large amount of good fat on them and also purchased less pigs in line with the vegetable output of our restaurant. The texture and quality of the meat is nothing like ive never seen before.

November 2016 After slaughter we teamed up with Caherbeg organic pork, Willy and Avril Allshire to dry cure all the legs for Christmas market, nose to tail eating and breaking the animals down ourselves as a learning process, we brought the whole team in one night and broke down 6 animals. Have to say was quite emotional and exciting at the same time. We have to thank Willy & Avril for their expertise and guidance.

Now we are having fun with creating menus from these beautiful rare breed saddlebacks. 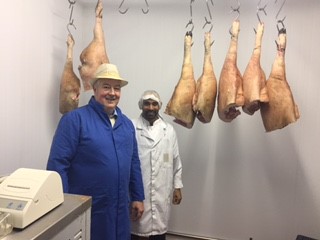